28th September 2020: Vodafone has started the first commercial trials in Africa of the Disaggregated Cell Site Gateway (DCSG) solution that was developed with the Telecom Infra Project (TIP). The trial is taking place within Vodacom South Africa.

The trial seeks to determine the DCSG’s performance in live 4G and 5G network environments, and its ability to interoperate with Vodacom’s current radio access network (RAN) providers. This involves using the DCSG to manage commercial traffic in urban, rural and ultra-rural areas.

The innovative DCSG was developed within TIP’s Open Optical & Packet Transport (OOPT) Project Group, by a sub-group led by Vodafone and Facebook. The TIP DCSG uses open, standard-based, disaggregated network technologies to target several opportunities in operators’ IP aggregation networks. This includes overall deployment cost reductions and the creation of a more diverse supply chain as well as operational efficiencies from being able to use Software-Defined Networking (SDN) technologies for network management automation.

The launch of the commercial trial follows the completion of successful tests conducted over the past six months. Vodacom tested a DCSG using hardware from Edgecore Networks and network operating system (NOS) software from Infinera. 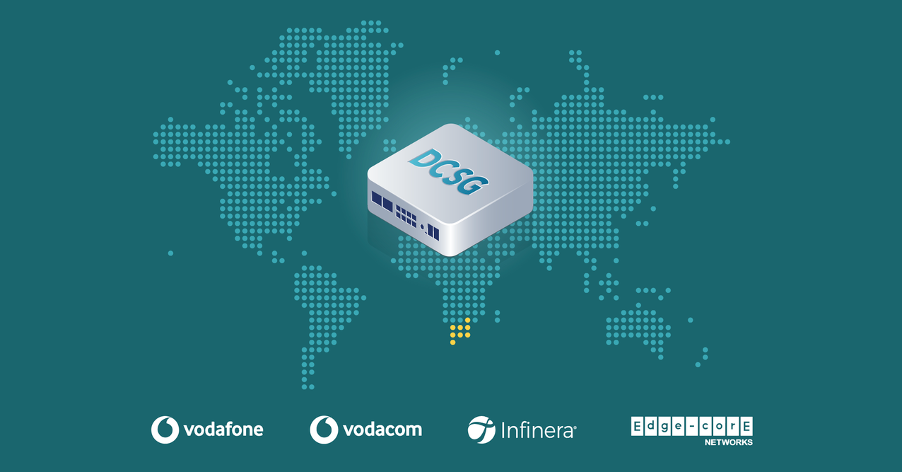 Beverly Ngwenya, Chief Technology Officer of Vodacom South Africa said: “We are extremely excited about the potential of the DCSG solution. This promises to broaden our supplier market, expedite the development of new features, reduce capital expenditure and improve operational efficiencies.”

Eva Rossi Head of Vodafone Group’s Transport networks team, said: ” Proving the commercial viability – of TIP’s DCSG will help create a more robust and diverse supply chain, benefitting the global telecoms industry. The DCSG solution has shown very promising results and we are very pleased by the positive response from the industry so far.”

Attilio Zani, Executive Director of TIP, said: “Vodacom is a pioneer in the adoption of TIP’s DCSG technology in Africa and we are very pleased that they are proceeding with commercial trials of the solution. We believe that the success of these trials will showcase the commercial viability of DCSG for large scale commercial deployments not only in South Africa but in other markets as well, and demonstrate the case for how new solutions can significantly improve the quality of connectivity.”

Vodacom is part of Vodafone Group which has led trials of open access network equipment in Africa and Europe. Vodacom provides a wide range of communication services, including mobile voice, messaging, data, financial and converged services to 116 million customers (including Safaricom). From its roots in South Africa, the company has grown its mobile network business to include operations in Tanzania, the Democratic Republic of Congo, Mozambique, Lesotho and Kenya. its mobile networks cover a population of over 289 million people. Through Vodacom Business Africa (VBA), it offers business managed services to enterprises in 51 countries.

About the Telecom Infra Project
The Telecom Infra Project (TIP) is a global community of companies and organizations that are driving infrastructure solutions to advance global connectivity. Half of the world’s population is still not connected to the internet, and for those who are, connectivity is often insufficient. This limits access to the multitude of consumer and commercial benefits provided by the internet, thereby impacting GDP growth globally. However, a lack of flexibility in the current solutions – exacerbated by a limited choice in technology providers – makes it challenging for operators to efficiently build and upgrade networks. Founded in 2016, TIP is a community of diverse members that includes hundreds of companies – from service providers and technology partners, to systems integrators and other connectivity stakeholders. We are working together to develop, test and deploy open, disaggregated, and standards-based solutions that deliver the high quality connectivity that the world needs – now and in the decades to come. Find out more: www.telecominfraproject.com